Common Diseases in sheep : Morbidity and mortality are the two important factors resulting in heavy losses in sheep production and improvement programs. Prevention is always better than cure as it is a lot cheaper. This has special significance with sheep as they seem to respond less to treatment when sick than other livestock species. Diseases in sheep can be broadly classified as non-infectious and infectious.
a)      Non-infectious diseases in sheep
Approximately 80% of deaths in lambs have been estimated due to non-infectious causes. Starvation, primarily from mismothering and behavior, nutritional and environmental stress, reproductive problems and predation are the major causes reported.
(1)    Pneumonia
It is one of the most common and important pathological conditions in sheep. It is characterized clinically by increased respiration, coughing and abdominal breathing. A toll of 20-40% of the mortality has been reported at organized sheep farms due to pneumonia of bacterial or viral origin. Another type of pneumonia is “aspiration” or “drenching” pneumonia caused to wrong and forceful drenching operations. If some fluid has erroneously entered the animal’s respiratory tract, its head should be lowered immediately and slapped a few times.
(2)    Ruminal tympany (Bloat)
It is the over-distension of the left flank either due to free gas or froth. This is generally encountered in “greedy feeders” when lush green pasture is available. Tying a bitter (eg. neem) stick in the mouth as a bit to increase secretion of saliva is the most practical and can be done immediately. Oral administration of sweet oil with turpentine oil or at times with formalin is advised.
(3)    Rumen acidosis
Ingestion of large amounts of highly fermentable carbohydrate feeds causes an acute illness due to excess production of lactic acid in the rumen. Clinically, the disease is manifested by dehydration, blindness, recumbency, complete rumen stasis and a high mortality rate. Normal saline, sodium bicarbonate and antihistaminics are advised.
(4)    Intussusception
It occurs commonly due to nodular worms, change in feed and local intestinal problems. The animal is dull, off-feed, kicking at the belly with no rise of temperature, frequent straining with no defaecation, colic symptoms, and at later stages, recumbency. Emergency surgery is the only rational treatment.
(5)    Deficiency diseases
Young sheep grazing on drought-stricken pastures can suffer serious depletion of reserves of minerals and vitamins.
1.       Copper and Cobalt : Characterized by anorexia and wasting. Growth and wool production are severely retarded. Wool may be tender or broken. Fine wool becomes limp and glossy and loses crimp, developing straight, steely appearance. Anemia, diarrhoea and unthriftiness occur in extreme cases. Copper or cobalt sulphate treatment causes rapid disappearance of the symptoms.
2.       Calcium, Phosphorous & Vit. D : The daily requirement of Ca, P & Vit. D for an adult sheep is about 2.5 gm, 1.5 gm and 300-500 units, respectively. Deficiency may result in rickets in lambs and osteomalacia in adults. Mineral supplementation in diet is essential to prevent this deficiency.
3.       Vitamin A : Vit. A deficiency occurs in sheep on dry countryside during periods of drought. Symptoms include night blindness, corneal keratinization, ptyriasis, hoof defects, loss of weight and infertility. Congenital defects are common in the offspring of deficient dams. Animals should have access to green pasture and should be supplied with Vit. A in feed to prevent deficiency.
(6)    Pregnancy toxaemia (Ketosis)
It is a highly fatal disease caused due to a decline in the plane of nutrition and short periods of starvation (40 hrs) during the last two months of pregnancy. Hypoglycaemia and hyperketonemia are the primary metabolic disturbances. It is primarily a disease of intensive farming systems. Symptoms include separation from the flock, apparent blindness, constipation, grinding of teeth, drowsiness, tremors of the head, twitching of lips, in-coordination, ketonic breath, leading to coma and death. Treatment comprises intravenous administration of 50% glucose. Supply of molasses in the ration and provision of additional concentrate in the last two months of pregnancy helps prevent the condition.
(7)    Poisoning
1.       Organochlorine compounds : This group includes DDT, BHC, lindane, aldrin, dieldrin, chlordane, toxaphane, methocychlor etc. which are used as pesticides on crops and as ectoparasiticides on sheep. Toxicity symptoms include increased excitability and irritability followed by muscle tremors, weakness, paralysis etc. Treatment consists of administering antidote, usually short-acting barbiturates.
2.       Organophosporous compounds : This group consists of malathion, darathion, chlorathion, carbophenothion, demton, dasnon, dimethylparathion, trichlorphon, dioxalthion etc. Symptoms of toxicity are profuse salivation, muscle stiffness, dyspnoea with open mouth breathing, tremors. Treatment consists of administering antidote, usually atropine sulphate.
3.       Snake bite : Sheep are usually bitten on the scrotum or udder. The presence of hair may obscure the typical fang marks. Prolonged pain, muscular weakness, impaired vision, nausea and paralysis are generally exhibited along with symptoms of shock. If anti-venin is not available and the bite is located in an area where a tourniquet cannot be applied, excision of an area of skin and sub-cutaneous tissue can be life-saving.
(8)    Wounds
During the monsoon season, a large number of animals suffer from wounds at various sites esp. around the ear, sternum and fore- and hind-legs. The main reason seems to be the awns of Aristidia and Heteropogonspecies of grasses, which initially break the continuity of the skin, which is then attacked by flies making the wound infected and maggoty. It causes great stress in young lambs, and may also lead to conjunctivitis, corneal opacity and blindness.
(9)    Dystokia
The common causes are insufficient opening of the cervical canal, heavy lambs (esp. crossbreds), abnormal fetal position and uterine torsion. The condition can be relieved surgically.

b)      Infectious diseases in sheep

(1)      Blackleg
It is an acute, infectious disease caused by Clostridium chauvoei and characterized by inflammation of muscles, severe toxaemia and high mortality (approaching 100%). All age groups are susceptible. Increased protein feeding of sheep increases their susceptibility. The spores are highly resistant to the environment and the portal of entry is through the alimentary mucosa. Infection in sheep generally takes place through skin wounds following shearing and docking. Symptoms include high fever, anorexia, discolouration of skin, crepitation and depression. Penicillin is the drug o choice for treatment.
(2)          Enterotoxaemia (pulpy kidney)
It is an acute disease of sheep of all ages, but primarily of lambs. It affects animals in a high state of nutrition on a lush feed, grass or grain. Morbidity rates seldom exceed 10% but mortality rate approximates 100%. It is caused by Clostridium perfringens type D which normally inhabits the alimentary tract of sheep. Under certain conditions, the organism proliferated rapidly in the intestines and produces lethal quantity of toxin. In lambs, the course of illness is very short, often less than 2 hours and never more than 12 hours, and many are found dead without manifesting early signs. Symptoms include green, pasty diarrhea, staggering, recumbency, opisthotonus, and acute, clonic convulsions with frothing at the mouth. A history of sudden death of several big lambs justifies a tentative diagnosis of enterotoxaemia. Suphadimidine may be effective for treatment. Two major control measures include reduction in the feed intake and vaccination.
Infection with Cl. Perfringens type B (lamb dysentery) and type C (struck, hemorrhagic enterotoxaemia) result in severe enteritis with diarrhea and dysentery in lambs.
(3)          Tetanus
It is an acute, infectious disease manifested by tonic convulsions of the voluntary muscles. In sheep, it commonly follows routine operations such as shearing, docking, castration and even vaccination.Clostridium tetani form spores which are capable of persisting in soil for a number of years. The portal of entry is usually through deep, puncture wounds. Symptoms include stiffness of limbs, lock jaw, opisthotonus, followed by death due to asphyxiation. Tetanus antitoxin is usually administered but is of little value when the signs have appeared.
(4)          Pasteurellosis
It is primarily caused by Pasteurella haemolytica in sheep and usually occurs in pneumonic form, although a septicaemic form is not uncommon in lambs. Morbidity and mortality rates may be as high as 40%. Transmission occurs by the inhalation or ingestion of the infected material. Symptoms include pyrexia, mucopurulent discharge from the eyes and nose, coughing, depression and anorexia. Preventive vaccination is recommended, after which the animals should not be sent out for grazing for 2-3 days.
(5)          Paratuberculosis (Johne’s disease)
It is a chronic, wasting disease caused by Mycobacteirum paratuberculosis and characterized by progressive emaciation and a thickening and corrugation of the intestinal wall. Mortality rate may be as high as 10%. The disease causes severe economic losses in infected flocks. As the progress of the disease is slow, it is mostly seen in older animals. No treatment is successful.
(6)          Sheep pox
It is a highly contagious viral disease characterized by development of vesicles and pustules on the skin and internal lesions. Spread may be by contact with infected animals and contaminated articles, or by inhalation. It often causes death in 50% of affected animals. Infection of the pustules by secondary organisms may cause pyrexia and other complications. The course of the disease is 3-4 weeks, during which time the sheep becomes emaciated and may shed their wool. Vaccination is the best control.
(7)          Foot and mouth disease
It is an extremely contagious, acute viral disease characterized by development of vesicles in the oral cavity and in the interdigital space. Mortality is usually low (3%), but the economic loss is chiefly due to the loss in condition of the affected animal. Transmission is by contact with the diseased animal and incubation period is less than 24 hrs. Antibiotics are recommended to check secondary infections. Vaccination is the best control.
(8)          Contagious ecthyma
It is a viral disease characterized by the formation of papules and pustules and the piling up of thick crusts on the lesions. The virus gains entry through unobserved wounds on the lips. The incubation period is dependant on the amount of virus introduced. The lesions are mostly found on the commissures of the lips and are covered by scabs. The course of the disease is 1-4 weeks. Antibiotics are recommended to check secondary infections.
(9)          Blue tongue
It is an infectious but non-contagious, exotic disease of sheep. Natural transmission takes place through insect vectors viz. Culicoides and Aedes species, and sheepked Melophagus ovinus. Incubation period is less than a week. Pyrexia upto 106oF is the common initial symptom.. The disease has three clinical forms : abortive, acute and sub-acute. The abortive form mostly goes unnoticed. In the acute form, there is fever lasting for 5-6 days with nasal discharge, frothing, marked salivation, highly congested and cyanotic nasal and oral mucosa, epithelial excoriation in the oral cavity and purplish discolouration of the interdigital space, pasterns and coronets. Symptoms are less severe in the sub-acute from. Morbidity rate may be 50% or more whereas mortality rates very widely. Antibiotics are recommended to check secondary infections. 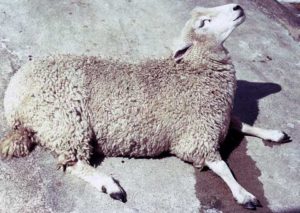 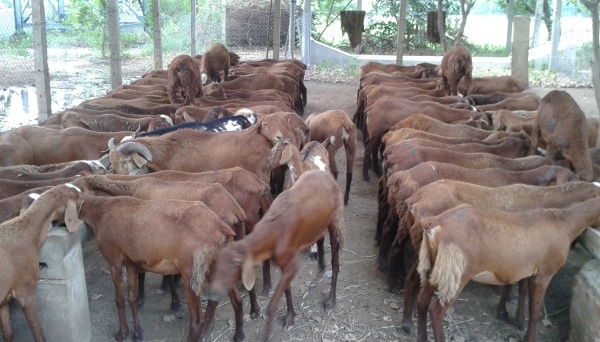